Alan talked about what it was like to stand in front of the master at Waterman’s Hall. He said it was very scary because the Master asked lots of hard questions about being a lighterman. Often your master would be your father and if you got questions wrong you would fail the test and disappoint your family. 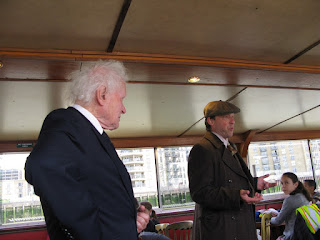 Alan was a member of parliament and he was part of the R.A.F but he said his favourite job was being a lighterman . He said he really enjoyed his time afloat on the Thames. It was an exciting time of his life. He described working during the summer as a glorious time

He had plenty of money as he was paid very well. At the weekends, lightermen would spend their money on flash cars and fancy clothes. Alan told us how he bought a 1930 Austin 7.

Alan told us he was extremely fit when he was a lighterman  as the work was very hard and tough. It involved lots of lifting cargo, tying ropes and steering the boats.

When Alan left his job as a lightermen , he worked hard to educated himself and he even managed to get a scholarship from the R.A.F to attend a university in Oxford. His nickname when he worked on the river was ‘Shakespeare’ as he loved to read all of Shakespeare’s plays. At Ruskin College he studied politics, philosophy and economics and he later became a member of parliament.

Alan was a member of parliament from 1966-1979 and during this time he fought hard and campaigned for lightermen’s rights as it was a cause very close to his heart.
Posted by digital:works at 01:49