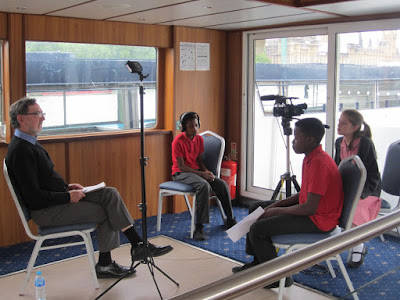 My group and I were chosen to film interviews to turn it then into a documentary all about lightermen. We (me, Callum, Sarah. W and Sara) interviewed first a man called Mr. John Daniel, Peter Daniel's father. He told us about his working life on the River Thames.
As a Former lighterman he could tell us all we would need to know about the river. He sensed that the river was in his blood since childhood. Since he lived right next to it, he felt like he was being pulled to it like a magnet. Although his dad didn’t originally work on the Thames, he felt that need for the water every day. His dad was a marine engineer, but that didn’t let John’s hopes get low and although his father wasn’t his master, nevertheless he passed his apprenticeship and became a lighterman of the River Thames.
The story that he met his wife is actually quite funny. He had just earned his wages and had gone out with one of his girls on a yacht trip out on the lake when she had fallen in with no clothes to change into so they both went into a small pub which is right next to the O2 now. When she had dried off, John had taken her home and they started going out until they married. Then he had three sons which one of them turned out to be Peter Daniel who work with us and mentored us.
Posted by digital:works at 12:31